5 Ways to Fall in Love with Red Rocks 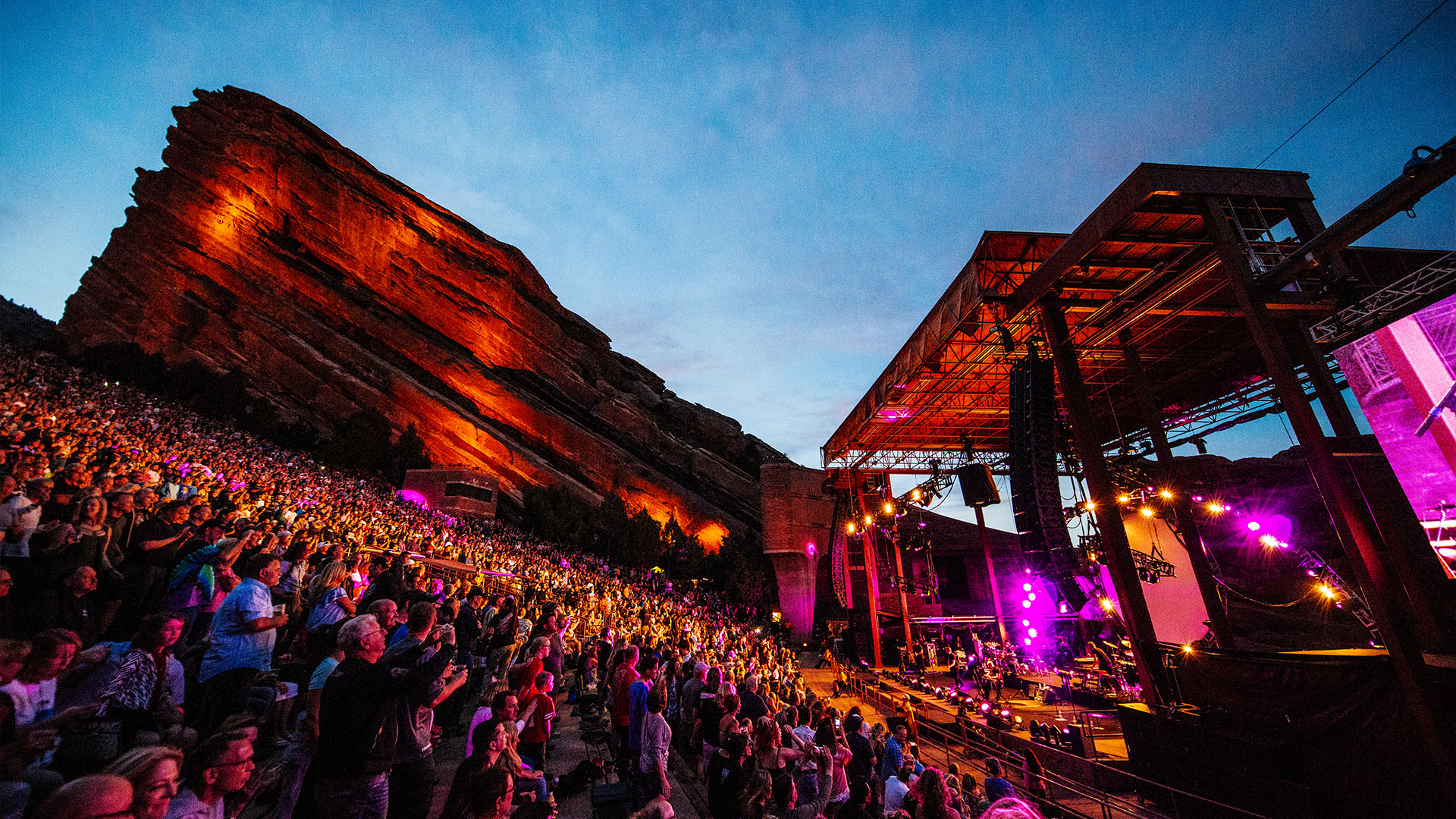 Please check the venue’s website before you venture out for the latest COVID-19-related policy updates and hours of operation.

Red Rocks Park & Amphitheatre’s reputation may precede it, but there’s no replacement for experiencing this acoustically impeccable, naturally stunning marvel of ochre sandstone yourself. Designated a National Historic Landmark by the National Park Service and Department of the Interior, the amphitheater is a top destination for Colorado residents and tourists from around the world. It’s an easy 15-mile drive from Denver, or hop aboard the Red Rocks Shuttle, which offers round-trip options departing from Thirsty Lion Gastropub & Grill at Union Station and Illegal Pete’s on Colfax Avenue. So, make plans to see a concert, watch a film, hike, dine or geek out on history. We dare you not to fall for Red Rocks’ rare beauty.

The high point of many a summer has been a life-changing Red Rocks concert. You’ll never forget the moon rising over Denver as Neil Young breaks into “Harvest Moon.” Or a mountain breeze carrying the riff of a Widespread Panic tune over the sandstone walls and into the inky sky. Or even the sprinkling of rain as James Taylor grins and sings, “I’ve seen fire and I’ve seen rain.” The Beatles performed here in 1964, marking the first rock ‘n’ roll event of epic proportions. After that, the stars kept coming. Sonny & Cher, the Carpenters, Carole King, Depeche Mode, Jimi Hendrix, Rush, the Grateful Dead, Stevie Nicks, Phish, Neil Young, Kenny Chesney, Florence + The Machine. This list goes on and on, representing every genre. Live concerts have also been filmed at the venue. In 1983, U2 experienced a watershed moment that made the Irish group internationally famous for its iconic album, “U2 Live at Red Rocks: Under a Blood Red Sky.” It almost doesn’t matter who you see play at Red Rocks — just see someone. Here are some highlights of this year’s Red Rocks schedule.

Concertgoer Tip: Getting from your parking spot to your seat is part of the adventure. Wear comfortable shoes and expect a bit of light hiking with some amazing views along the way. (Although it’s easy to arrange to be dropped at the top entrance if you’re unable to make the trek by foot.)

GET YOUR HEART PUMPING

Red Rocks is also a park, owned by the city of Denver. It’s open to visitors one hour before sunrise through one hour after sunset. Just being here will quicken your pulse, but if that’s not enough, consider hiking Trading Post Trail or hiking, mountain biking or horseback riding Red Rocks Trail. Both trails explore the park’s dramatic geology, trees, wildflowers, wildlife and views. Another option is to join the ambitious locals who come to run up and down the stone steps of the amphitheater for a real thigh-burner. Or attend Yoga on the Rocks for the most inspiring downward dog view ever.

The giant sandstone outcroppings that form the walls of Red Rocks Amphitheatre are higher than Niagara Falls and are part of the geological Fountain Formation, deposited approximately 280 million years ago. Believe it or not, the Rolling Stones weren’t around yet, and, in fact, Red Rocks didn’t get its start as a music venue until the early 1900s, when Renaissance man John Brisben Walker set up a makeshift stage among the rocks. A famous opera singer came to perform and declared it “acoustically perfect,” and it’s been revered by musicians ever since. Learn more about Red Rocks’ human and geological history at the Visitor Center, which has educational displays, a short documentary and a Performers’ Hall of Fame.

Visitor Tip: Stop by the the Colorado Music Hall of Fame. The CMHOF has been created to honor those individuals who have made outstanding contributions, to preserve and protect historical artifacts, and to educate the public regarding everything that’s great about our state’s music.

SEE A FILM ON THE ROCKS

Kick back and take in some classic and cult-favorite films on the big-big-big screen at Red Rocks. Great cinema is just the start of the entertainment on movie nights. Each Film On The Rocks event features an opening comedian or band and fun audience participation contests.

Filmgoer Tip: Picnics are welcome, so pack some goodies and sealed nonalcoholic bevies. Don’t forget to bring a few blankets to cuddle under during the suspenseful scenes.

GRAB A BITE AND DRINK UP THE VIEW

Built around two giant slabs of red sandstone, Red Rock’s Ship Rock Grille is worth a visit for the view alone. Better yet, grab a seat on the patio to dine at the edge of a mountainous panorama and order up some inventive Colorado-themed dishes like buffalo tamales smothered in house-made green chile or elk sliders with a side of crispy fries.

Want something to remember your Red Rocks visit by? Stop by the gift shop which sells cozy sweatshirts, memorabilia, books, CDs and more.

Click on the image above to take a virtual tour of the trails at Red Rocks Park & Amphitheatre via Google Street View.