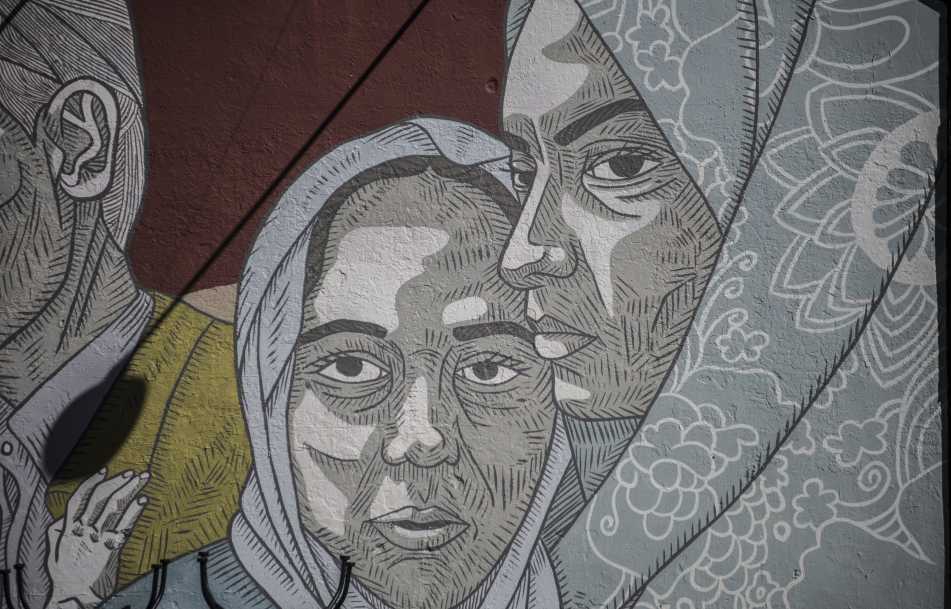 Denver street artists have been busy brightening (and enlightening) the urban landscape for decades by making canvases of the city’s alleyways, building exteriors, warehouses, garage doors and storefronts. Now with local news source Westword reporting a proliferation of more than 100 new creations in just one summer, there’s more Denver street art to see in Denver than ever before.

If you’re interested in tracking down thought-provoking murals, graffiti and street art in Denver, we invite you to embark on a tour of the areas and compositions listed below. There are many more examples across the city — far more than we could possibly cover here — so be prepared to stumble across surprises along the way and in other neighborhoods throughout the city.

A few things to note: We’re using the term “street art” fairly broadly here. Many of the works listed below were commissioned by businesses, events or communities, while others were unsanctioned paintings or graffiti — all are in the open air for anyone to view and enjoy. Also, street art, by its nature, is often found in alleyways, under bridges or in abandoned lots. Please use common sense and don’t go traipsing into unfamiliar areas alone or at night. Finally, artists regard the city’s walls and surfaces as living canvases, so don’t be surprised if you go looking for something listed below and find a new piece in its place. That’s part of the fun.

Denver is brimming with street art all over town. Get out and explore.

The River North Art District (RiNo) has street art on nearly every corner.

One of Denver’s creative hubs, River North Art District (RiNo) leans heavily on its industrial past, preferring to revitalize historic warehouses and factories rather than tearing things down. In that same spirit, it’s fitting that the district’s creative expression extends well beyond its galleries’ walls, with colorful and innovative street art around nearly every corner and an influential annual mural event called the Colorado Crush Street Art Festival in September.

“Reverberations” – Trippy, concentric circles comprised of geometric patterns overtake an otherworldly landscape in this pulsating piece by Damon Soule and Justin Lovato. Find it on the east side of Larimer, between 25th and 26th streets.
“Larimer Boy and Girl” – Artist Jeremy Burns’ clever use of a building’s extruding fins means you can only observe the complete image by walking toward it from a distance. Go one way and you’ll see a boy with a surprised expression; go the other to see a melancholy girl. It’s located at 27th and Larimer.
2668 Walnut St. – Vyal One tackled a massive project when he adorned the entire building at 27th and Walnut in hallucinogenic orbs and eyeballs. The result is electric.

Like one of its iconic neon marquees, East Colfax is abuzz with energy 24/7. Some of Denver’s best live music venues are here, and its solidly urban, slightly gritty nature is both a draw and incubator for artistic expression. With a grant program in the works, expect to see even more street art coming to East Colfax soon.

“George Floyd” – In 2020, muralists Detour and Hiero completed a portrait of George Floyd on the Ready Temporary Services building located on Colfax Avenue at High Street. It was part of a campaign of murals that call attention to African Americans who’ve been killed at the hands of police officers.

“Walmart Girl” – Smiley faces replace the heads on a row of nude, arms-bearing women in this bold statement by Ark Artiste. It, too, is part of the 30-artist installation at Williams and Colfax.

ABend Gallery Mural – The gallery, commissioned Anthony Garcia and Caleb Hahne, features a transfixing image of blindfolded and closed-eye faces fragmented by lines and bursts of color. See it at York and Colfax.

THE ART DISTRICT ON SANTA FE

The Art District on Santa Fe is a designated Colorado Creative District, with the largest concentration of art galleries in Colorado — more than 30 of them. The neighborhood is splashed in brilliant color and covered in artwork from head to toe, inside its galleries and outside on it doors, alleys, hallways, sidewalks, walls, mailboxes, windows…you get the picture.

“Love This City” – Artist Pat Milbery had long been envisioning a mural that would express his love for Denver, while VISIT DENVER happened to be looking for a special way to celebrate the 10th anniversary of Denver Arts Week. The two came together to make “Love This City,” a project that expanded into three murals in collaboration with three neighborhoods: Art District on Santa Fe (at 7th and Santa Fe), Golden Triangle Creative District (at 12th and Bannock) and River North Art District (at Broadway and Arapahoe). Stop by the Art District on Santa Fe and River North Art District to admire the vibrant colors and heart, bird and music motifs unique to each of the remaining murals.

“Smiling Boy” – The alley between Santa Fe Drive and Inca Street is one long chain of wonderful murals, including this touching depiction of a jubilant boy with outstretched arms, painted by an artist who goes by the street name B.L.V.D.

“The Mermaid” – Women bearing sensual expressions and flowing hair wrap around the corner at 9th and Santa Fe Drive. in bold turquoise, tangerine, lime and electric blue. It was painted by Josiah Lee Lopez, in conjunction with artist Ratha Sok and students of VSA Colorado, a program that connects people with disabilities to artistic opportunities.

“Love This City,” by Pat Milbery, is a series of three murals in three Denver arts districts.

A hip enclave within the Highlandsneighborhood, Confluence Park is nestled just east of I-25 where the South Platte River and Cherry Creek converge. The area enjoys acres of riverside parkland and a trendy collection of eateries, boutiques and condominiums — plus a significant number of colorful paintings adorning bars, breweries and building walls.

Peyton Manning – Well known by locals for his vivid murals all over the city, Gamma Acosta further endeared himself to Denverites by rendering a tribute to former Broncos quarterback Peyton Manning on the side of the Monkey Barrel Bar (Platte Street beside the Highland Bridge). The glowing Vince Lombardi Trophy was added promptly after Manning’s Super Bowl 50 win.

“Greetings from Denver” – Artist Victor Ving travels the country creating vintage postcard-style tributes to cities. Denver’s is a standout, complete with skier, craft beer, iconic Union Station, Red Rocks Amphitheatre and other sources of local pride. See it on the side of Denver Beer Co. at 1695 Platte St.

“Denver 1859” – While we were researching this article, we came upon Delton Demarest and Harrison Nealey, who were unloading a rainbow of aerosol cans, erecting ladders and beginning work to reproduce a historic scene of Denver in 1859, a year after the city’s founding when gold seekers were pouring into town. See the completed work in the alley a half block north of 15th Street on Platte.

As South Broadway undergoes a major renaissance — with theaters, music venues, bars, restaurants, galleries and shops flourishing like mad — the district’s open-air art tradition continues to thrive as well. Much of it is more of the “renegrade” strain of street art, with nearly every alleyway and side street on the west side of South Broadway sporting some kind of expression — from graffiti tags to elaborate masterpieces.

GB Fish and Chips –GB’s has given Delton Demarest free hand at covering the patio area and alleyway behind the restaurant with murals — from a playful sea-life soccer game to a tribute to the Rolling Stones and Led Zeppelin splashed across the Union Jack, this is a spot with plenty to take in.

Bushwackers Saloon – The murals on Bushwackers practically jump off the wall. Be creeped out by the green girl with ants crawling over her, admire the detail of the dinosaurs chasing cars, or imagine being swallowed by a giant tiger mid-roar.

1866 South Broadway – On a wall outside the brick Regal Vintage (a used clothing and jewelry store) is a portrait of a biblical Eve-like woman but with modern style, punctuated by a rather colorful serpent. It was created by Victoriano Rivera, a young artist with a growing reputation.

A free, two-day festival perfect for the entire family. Hundreds of artists work together to turn Larimer Square into an outdoor museum of spectacular art.

If you like street art, you will dig this festival inspired by the Italian tradition of beautifying city streets. Held on Larimer Square each summer, watch artists while they work — making vibrant chalk art on the pavement to the delight of (carefully stepping) passersby. Students, as well as professional artists, create designs that range from traditional to contemporary.

Austin Zucchini Fowler is a Denver muralist whose mission is to spread gratitude across Denver by highlighting essential workers during the COVID-19 crisis. He works in a unique pointillism style mixing in spray paint and acrylic brush work. Check out his ongoing body of work “Walls of Gratitude” by taking a self-guided tour of completed murals throughout the city.

See a different side of the city as you explore street art, murals and graffiti. Denver Graffiti Tour provides leisurely two-hour strolls through the vibrant River North Art District (RiNo). Not only will you learn about the artists and their work, but get insider tips on go-to bars and hip restaurants.

The state’s biggest celebration of street art takes place in the fall where you’ll see some stunning murals and feel the community vibe. The streets and alleys become open-air galleries, celebrating art, creativity and culture. CRUSH Walls is an arts festival like no other!

Denver has its own gang of crocheting street artists. The Ladies Fancywork Society has “crochet bombed” benches and signs around town but also have been commissioned for large-scale installations, such creating a temporary giant legwarmer for the “Dancers” sculpture outside the Denver Performing Arts Complex. Rad.