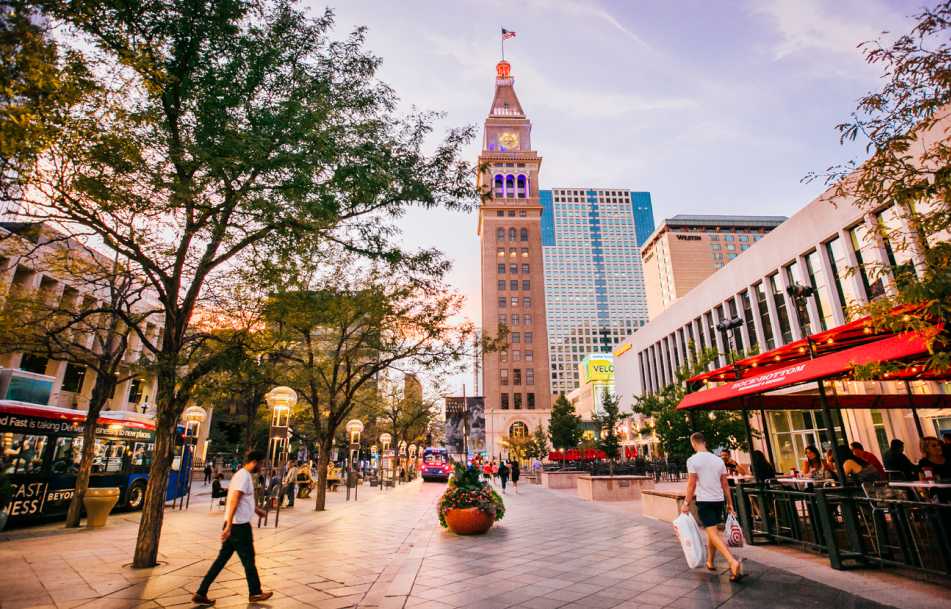 THINGS TO SEE AND DO

The mall offers Denver’s best people watching. There are 42 outdoor cafés along the mall, making it the perfect place to grab a bite to eat or have a drink. Denver Pavilions , near the south end of the mall, is a shopping and dining complex with 12 movie theaters and more than two dozen shops and restaurants. At the north end of the mall, 16th Street continues as a pedestrian path over three bridges connecting downtown to Commons Park and LoHi, a hip neighborhood filled with restaurants and brewpubs. Points of interest along the mall include the D&F Tower, a two-thirds replica of the Campanile of St. Mark’s in Venice that was the highest building west of the Mississippi when it was built in 1909.

After dark, horse-drawn carriages and pedi-cabs carry people up and down the mall, while nearly a million lights twinkle above in the more than 200 trees that line the promenade.

Corner Bakery Café – If a quick and tasty breakfast or meal is on your radar, head straight for the Corner. There are two important factors: fresh ingredients and fresh from the oven. The café has two locations on the Mall: 500 16th St.  and 1147 16th St.

The Delectable Egg  – This Market Street location launched The Delectable Egg in 1982 and has since grown to five restaurants that offer friendly neighborhood atmospheres and a mouthwatering and creative breakfast menu served through lunch.

FOOD ON THE GO

Jimmy John’s Gourmet Sandwiches  – Quick subs and sandwiches made from bread baked in-house, fresh sliced veggies and quality meats and cheeses are Jimmy John’s specialty. In fact, they aim to serve up bread that is less than four hours old.

MAD Greens – Pull up a chair inside or outside and enjoy a salad prepared as you watch, drizzled with handmade dressings. Plus, there are delicious paninis and wraps, and fresh juices made from raw fruits and vegetables.

Tuscany Coffee & Deli – The owner of Tuscany, an eatery established in 1994, wanted to bring the concept of the New York neighborhood deli he grew up with to Denver and deliver a full breakfast and lunch menu with items made to order.

Earls Kitchen + Bar  – Two large patios that look out onto the 16th Street Mall, a large recently renovated dining space and a full bar and lounge combine with tasty international cuisine to make Earls a go-to spot for visitors and locals.

Honor Society Handcrafted Eatery – Honor Society serves flavor-filled, seasonal fare prepared from scratch daily. You won’t find loads of sauce or seasonings that overpower the dishes; instead the taste shines through and the food nourishes body and soul.

The Kitchen  – Created in Colorado and now with several locations, The Kitchen is a farm-to-table bistro with food and drink that ebb and flow with the season and features goods from local farmers and purveyors. A raw bar, meat, fish and vegetarian dishes are on the menu.

Mellow Mushroom Pizza Bakers & Bar – This locally owned eatery is known for delicious stone-baked pizzas, hoagies, calzones and salads, and a focus on craft beers. Seventeen flat-screen TVs, a glowing bar top and a heated patio add to the vibe.

5280 Burger Bar  – Expect mouthwatering burgers made from Colorado beef, toppings made in-house (even buns and American cheese), 12 Colorado craft beers on tap daily and adult milkshakes, plus 5280 Ice Cream next door that churns out 16 flavors daily.

Appaloosa Grill  – Originally the vision of former Colorado Gov. John Hickenlooper, “The Horse” is known for dishing up all-natural proteins and foods made from scratch and featuring nightly music on a stage that hosts talented national and local musicians.

BD’s Mongolian Grill – It’s not often that you can truly customize a meal while eating out, but that is the mantra of BD’s Mongolian Grill, where diners chose from a selection of meats, seafood, vegetables, sauces and spices that are cooked by chefs on a 7-foot grill.

Little India Restaurant  – The Baidwan and Malhotra families have been cooking together in Denver for nearly two decades, serving authentic Indian cuisine that mingles exotic and simple tastes in a casual atmosphere accented by Indian art and music.

Maggiano’s Little Italy  – Scratch-made Italian-American meals at Maggiano’s are inspired by traditional recipes. The menu is packed with mouthwatering pastas, steaks, seafood, salads, sandwiches and desserts served in an inviting and classic atmosphere.

Hapa Sushi Grill and Sake Bar  – The harmonious blend of Asian and American cultures is described by the Hawaiian term “hapa.” Chefs at this downtown eatery mix traditional Japanese techniques with many styles of cooking. Look for early bird and night-owl specials.

Otra Vez Cantina  – Turn up the heat with roasted jalapeño queso dip, brick chicken mole, mahi-mahi with chili lime pepita crust and, of course, a selection of tacos, including pork belly al pastor, achiote shrimp and barbacoa. Then wash it all down with your choice of more than 200 tequilas and mezcals.

Henry’s Tavern  – Henry’s takes the concept of a local watering hole to a whole new level with a menu that incorporates ingredients and inspiration from the region, more than 100 beers on tap (and ciders, too) and live music from May through July.

Rock Bottom Brewery  – Fresh, handcrafted beers brewed on premise are the highlight but diners also fall in love with beer-inspired entrees, steak, ale dough pizza, tacos, burgers and sandwiches along with Friday night music on the patio during summer.

Thirsty Lion Gastropub & Grill – With loads of windows and a patio, Thirsty Lion expertly combines the feel of European and American pubs to serve up scratch-cooked cuisine, more than 50 beers and ciders, cocktails made with fresh fruit purées and juices, and various wines.

Yard House Downtown Denver  – When the craft beer revolution began in Colorado nearly 20 years ago, Yard House was there pioneering the way. A menu that reads like a road trip across America, classic rock music and 130 beers on tap meld to create a winning combination.